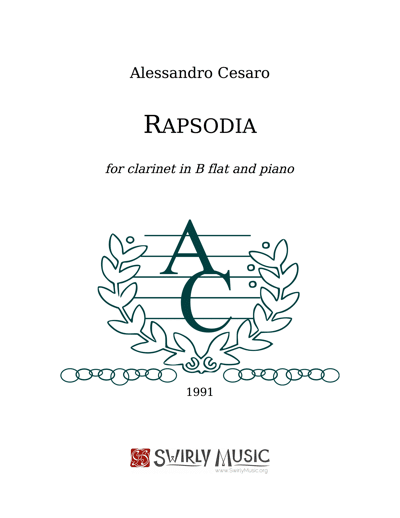 for clarinet and piano

The Rapsodia (Rhapsody) for clarinet and piano belongs to a new creative phase. It is a work in one movement divided into sections of opposite character. After a free almost improvised Tempo rubato, a rhythmic Vivacissimo suddenly appears. An Andante sostenuto follows with a melancholic tune. A short and agitated Allegro leads to the final Precipitato where the Tempo becomes increasingly faster till the dramatic end.

In order to better indicate the character of this composition, a particular notation is used where the indication ”senza tempo, colla parte” (without strict Tempo, but follow the other part) appears. Here the rhythm is completely left to the taste of the interpreters, but it can be suggested from the different spacing between each note.